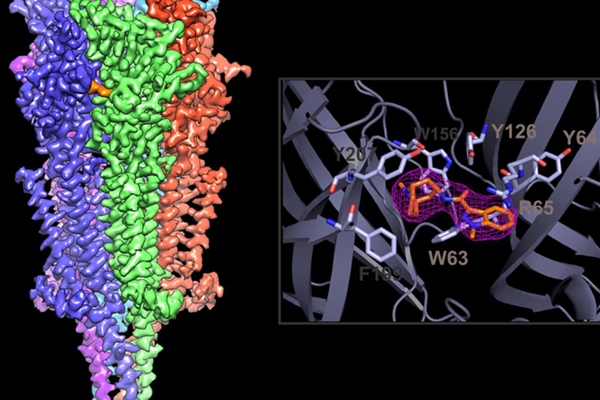 Researchers at Case Western Reserve University School of Medicine have used a cryo-electron microscopy technique to observe the interactions between a drug molecule and its protein receptor. The approach provides valuable information which could offer clues as to how to modify drug molecules to improve their effectiveness.

The way that drug molecules bind to their target receptors in the body can have significant consequences in terms of their efficacy. Enhancing drug binding could lead to better therapeutic effects for a wider range of patients. To achieve this, researchers need to understand the role of various components of the drug molecule in the interaction with the receptor binding pocket. However, observing and modeling the interactions between drug molecules and their target receptors is challenging. This new technique is called single-particle cryo-electron microscopy, and it involves cooling a sample down to very low temperatures and then imaging it using a new type of electron microscope. The technique allows researchers to image drug/receptor interactions at less than a billionth of one meter.

“In the
past, we didn’t have the confidence to model the drug in its binding pocket,” said Sandip Basak, a researcher involved in the study. “Now we can precisely do that. We can also watch the drug move in the pocket using molecular dynamics simulations.”

The research team used single-particle cryo-electron microscopy to investigate the interaction of setrons, a class of drugs used to manage vomiting and nausea, with their target serotonin receptors in the gastrointestinal tract. Setrons don’t work for everyone, meaning that there is room for improvement. “Cancer patients who have vomiting later in their treatment plans—delayed emesis—don’t tend to respond to setrons,” said Sudha Chakrapani, another researcher involved in the study. “There is a constant need for better drugs.”

Using cryo-electron microscopy, the research team could watch the motions of setrons as they bind to serotonin receptors. The observations revealed components of the drug and receptor that are important for binding, which the team validated by tweaking
these components to change the binding activity. In the future, the technique could lead to more effective drugs by providing researchers with a wealth of information on drug/target interactions.