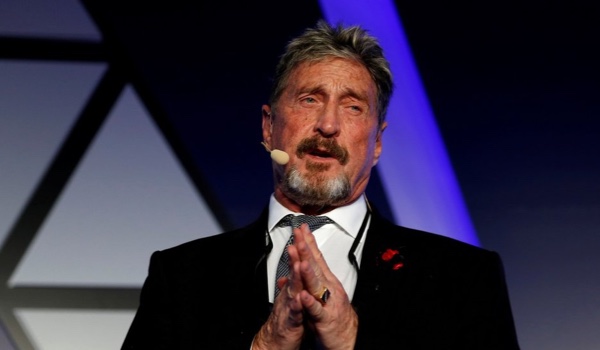 The United States Department of Justice on Monday unsealed an indictment that charges John David McAfee with tax evasion.

An English-American businessman, computer programmer, and political activist, John McAfee founded cybersecurity firm McAfee Associates in 1987 and ran it until 1994. The company was sold to Intel in 2010 for $7.68 billion.

After leaving McAfee Associates, McAfee founded other companies, with his wealth believed to have peaked in 2007 at roughly $100 million. The indictment does not allege that received income or had any connection with the company bearing his name.

McAfee was arrested in Spain on October 6 and faces extradition to the United States.

A June 15 indictment that was unsealed on Monday alleges that willfully failed to file tax returns between 2014 and 2018, albeit he earned millions from “promoting cryptocurrencies, consulting work, speaking engagements, and selling the rights to his life story for a documentary.”

To evade tax liability, the indictment says, McAfee directed the income into the bank accounts and crypto-exchange accounts of nominees. Furthermore, he allegedly concealed assets such as real estate, a yacht, and a vehicle.

Each of the tax evasion counts could bring a maximum sentence of five years in prison for the entrepreneur, while the count of willful failure to file a tax return brings a maximum sentence of one year in prison. could also be sentenced to a period of supervised release, as well as restitution and monetary penalties.

Also on Monday, the Securities and Exchange Commission (SEC) charged for promoting investments in initial coin offerings (ICOs) on Twitter, without revealing that he was paid to do so. The SEC claims he was paid more than $23 million for the promotions.

In fact, the SEC says, he told investors he received no compensation from the issuers, claimed to have had invested himself in some ICOs, and made other false and misleading statements as well. Jimmy Watson, Jr., McAfee’s bodyguard, was also charged.

The SEC filed a complaint with the U.S. District Court for the Southern District of New York, seeking “permanent injunctive relief, conduct-based injunctions, return of allegedly ill-gotten gains, and civil penalties.” The SEC also wants to have barred from serving as a public company officer and director.