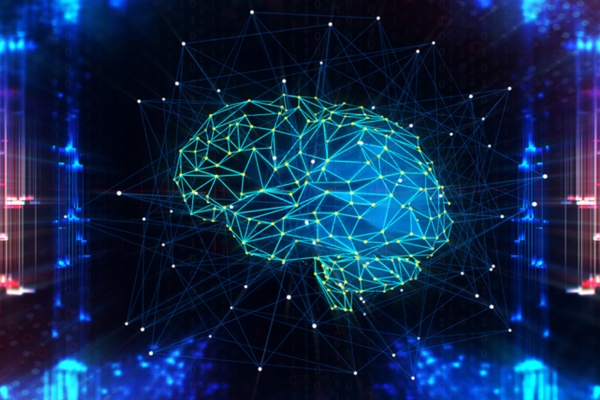 Now, the Dublin-based medical device giant is aiming to leverage AI in another business: stroke care. Last week, Medtronic announced that it has entered into a global distribution agreement with Viz.ai, whose artificial intelligence-powered imaging software is aimed at quickly treating patients suspected of having ischemic strokes. Viz.ai, based in San Francisco, received FDA’s de novo clearance for its clinical decision support software for stroke back in February 2018. The company is pursuing regulatory go-aheads in other countries.

In an interview this week, Stacey Pugh, vice president of Medtronic Neurovascular, explained that Viz.ai’s software can mean all the difference between a good and a bad medical outcome for a stroke patient with a large-vessel occlusion (LVO). Here’s what the software platform connected to CT scanners is capable of doing: the AI can quickly determine based on a CT scan of the patient’s brain, whether the patient has suffered a large-vessel occlusion, flag where it believes that occlusion has occurred and notify doctors.

“When you look at a scan of perfusion in the brain, there will be a certain amount of areas of perfusion you should expect to see, and this software through AI shows a segment of perfusion is missing, and that’s because the software has flagged it,” Pugh said in a phone interview. “It does this automatically before the scan can be read by a PACS [Picture Archiving and Communication  System] and a radiologist looks at it.”

This saves valuable time in a health event where time is of the essence. Per Medtronic’s announcement, a Viz.ai study in “two centers showed that in 95.5 percent of true positive cases, its technology alerted the stroke specialist earlier than the standard of care, saving an average of 52 minutes.”

“We know from all of the research that’s been done that even by moving care up by half an hour in a large-vessel occlusion, you can meaningfully impact outcomes,” Pugh said. “So gaining minutes is a very meaningful outcome.”

Consider the standard protocols today per Pugh where the patient arrives at a hospital that may not be a comprehensive stroke center and the doctor orders CT scans of the brain. Then, the radiologist reads the scan and sends the information to the physician who ordered the scan. Thereafter, the physician reviews the scan and radiological reports and sends the information to the receiving physician at the comprehensive stroke center. This process can take some time and meanwhile the patient is “losing about 1.9 million neurons per minute that you have an LVO in the brain,” Pugh said.

Viz.ai’s system cuts down these steps improving the chances for a better outcome, she said. But there is another advantage. This software is especially valuable at hospitals that may lack stroke expertise.

“These stroke cases get messed up a lot of times at these smaller hospitals,” Pugh said. “You don’t have physicians who are looking at these kinds of scans all the time and so it’s not just about speed, it’s about detecting cases which otherwise wouldn’t be detected.” 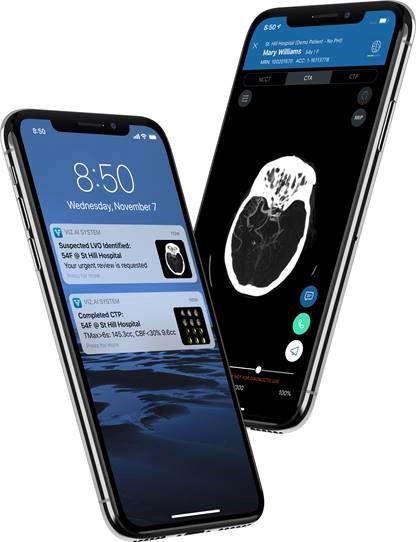 The Viz.ai app is able to alert physicians and display images of suspected large-vessel occlusions.

Perhaps equally importantly, the software platform can be preprogrammed to alert doctors about the potential LVO at both the smaller, local hospital where the patient first arrives and the comprehensive stroke care center where the patient will be ultimately treated.

So you have speed and accuracy built into the system and the ability to get everyone on the stroke care team on the same page simultaneously, Pugh said.

Th other capability of the Viz.ai system is communication. The HIPAA compliant, cloud-based application allows doctors on the Viz.ai system to not only view the brain perfusion images of the patient suspected of having a large-vessel occlusion on their smartphones but also to communicate with each other through the app thereby streamlining care.

Even comprehensive stroke centers can benefit from the Viz.ai system because of its ability to flag potential trouble areas, Pugh said.

While the terms of Medtronic’s global distribution agreement with Viz.ai was not disclosed, Pugh said that the software can be sold both as standalone and as part of a bundle with Medtronic’s stroke hardware products. They include the Solitaire stent retriever, guidewires and other products that allow surgeons to remove the clot in the brain.

Viz.ai was founded in 2016, according to Crunchbase by Dr. Chris Mansi, David Golan and Manoj Ramchandran. Mansi is a neurosurgeon and the CEO of the company.  The company raised $21 million in a Series A funding round in July 2018 that Kleiner Perkins led and in which GV (formerly Google Ventures) participated.

At the time, a Kleiner investor who joined Viz.ai’s board commented:

“We were attracted not only to the technology behind Viz.ai and its impact on patient outcomes, but also its adoption model. Many new health-tech solutions struggle to gain traction because they are an outside-in sale to medical teams, requiring changes to procedures and workflows. In contrast, physicians and their teams are driving adoption of the Viz.ai platform because it is not disruptive to emergency room procedures and fits naturally into existing systems,” said Mamoon Hamid, General Partner, Kleiner Perkins.

In other words, disruptive technologies can be more easily adopted as long as they do not cause disruption in the general, English sense of the term.

The partnership with Medtronic is further proof that the largest pure-play medical device company believes that more in the stroke market are likely to buy into Viz.ai’s product and vision.TrendMD v2.4.3