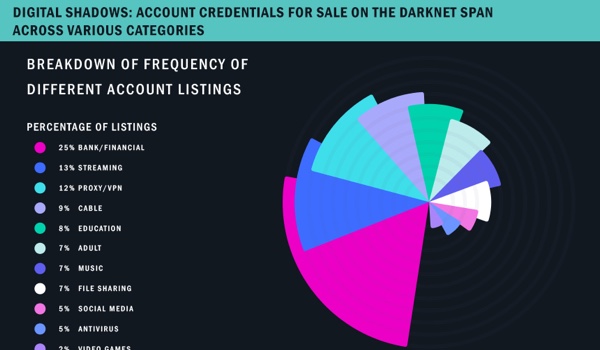 More than 15 billion username and password pairs have been offered on cybercrime marketplaces, including over 5 billion unique credentials, according to a report published on Wednesday by San Francisco-based risk protection solutions provider Digital Shadows.

The company told SecurityWeek that most of these usernames and passwords have been offered for free and the total number does not include numbers claimed by sellers, which indicates that the actual amount of exposed credentials is even higher.

In terms of prices, the average cost of a single account sold on cybercrime marketplaces was $15.43. Unsurprisingly, the most expensive are banking and financial services accounts, with an average price of nearly $71, but Digital Shadows researchers have also seen accounts sold for over $500.

In the case of antivirus accounts, Alex Guirakhoo, threat research team lead at Digital Shadows, told SecurityWeek that they are mostly for consumer products.

“Much like with the popularity of streaming accounts for sale, it’s likely that many buyers are simply of the mindset that they do not want to pay for their own antivirus subscription,” he explained.

Threat actors are also offering access to critical systems housed by organizations. Domain admin access has been offered for as much as $120,000, with an average price of just over $3,100. Pricing also depends on the targeted industry, with the local government and financial sectors having the highest prices. The company also noticed that accounting-related usernames are highly sought after, particularly accounts that include strings such as “invoice.”

Digital Shadows has pointed out that account takeover attacks are easy to conduct, as well as cheap, with specialized tools being sold for an average of only $4.

Marketplaces such as Genesis Market also allow cybercriminals to rent account access as an alternative to purchasing credentials. Hackers can rent an identity for a certain period — this often costs less than $10 — and the service also provides the victim’s “fingerprint data” to make it easier to hijack accounts and perform transactions without getting detected. This fingerprint data includes the victim’s IPs, cookies and time zones.