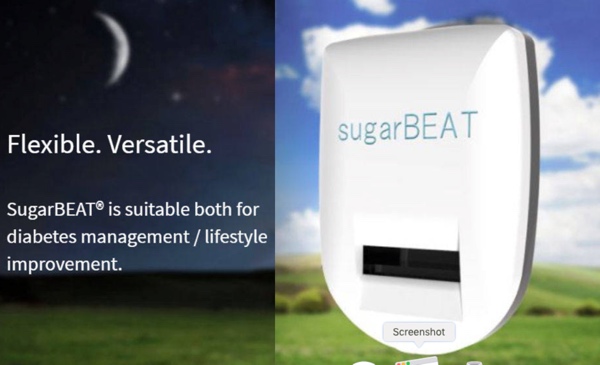 SugarBEAT, a non-invasive continuous glucose monitor (CGM) that can be worn around the arm, has been approved for sale in the European market. GlobalData, a leading data, and analytics company, predicts that the device is set to disrupt the wearable health tech market.

Renuka Sreeramoju, medical device analyst at GlobalData, said: “Due to its non-invasive nature and relatively low cost, SugarBEAT is expected to give tough competition to invasive CGM devices and attain a strong position in both diabetic (insulin and non-insulin dependent), pre-diabetic and wearable health tech markets in [the] future.”

SugarBEAT, which is manufactured by United Kingdom company Nemaura Medical, is a disposable adhesive patch worn on the arm. The patch draws interstitial fluid from the skin for glucose analysis by passing an imperceptible electric current through the skin.

Nemaura Medical said the adhesive patch system can be worn on non-continuous days, making it suitable for pre-diabetic and Type II diabetes patients, both of whom typically check their blood sugar levels periodically.

A press statement explained that the device is connected to a rechargeable transmitter and provides real-time, continuous glucose readings at five minute intervals — that is per hour — thereby creating an ambulatory glucose profile chart, where the trends, patterns and the extent of fluctuations and out of range glucose profiles can be observed.

The CGM device works with a smartphone app, which provides audible alerts or physical vibration of the Bluetooth-enabled mobile phone connected to SugarBEAT in instances where glucose levels are deemed to fall to dangerously low levels, until switched off by the user.

Sreeramoju said: “The high unmet need of standard finger stick testing and the painful insertion of CGM devices under the skin can be achieved by the availability of a Bluetooth-enabled smartphone CGM wearable device.”

Nemaura Medical plans to launch SugarBEAT in the United Kingdom and German markets in the third quarter of this year. The company says it is on track to submit an application to the U.S. Food and Drug Administration (FDA) mid this year.

Size of the CGM market

GlobalData estimtes that the glucose monitoring devices market in Europe will grow from $3.4 billion in 2018 to nearly $4.8 billion in 2025. In addition, GlobalData said the global and U.S. markets are set to grow 4.6 percent and 3.2 percent to reach US$16.3 billion and $5.6 billion, respectively, over the same period.

Due to its non-invasive nature, GlobalData projected that SugarBEAT was best placed to disrupt the multi-billion-dollar global diabetic and pre-diabetic markets.

“Given these benefits, we look forward to aggressively entering both the multi-billion-dollar diabetic (insulin and non-insulin dependent) and pre-diabetic markets. In addition, we plan to target the wearable health tech market for health-conscious consumers, which is experiencing explosive growth,” Chowudhry said.

Nemaura Medical’s clinical studies took place over 225 patient days and included 75 participants with either Type I orType II diabetes. The studies generated over 12,000 paired data points, with blood samples taken via catheter every 15 minutes over a 12-hour period for three non-consecutive days for each patient, the company said in a statement.

Nemaura Medical added that no device-related adverse events were reported.

LifeScan has also announced plans to launch a CGM system at the beginning of next year in collaboration with Sanvita Medical, a subsidiary of Nova Biomedical.