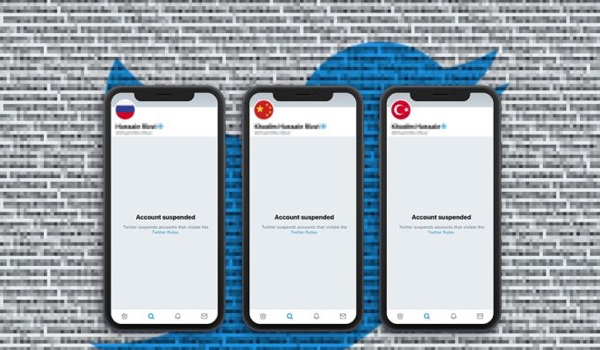 Twitter on Friday announced that it took down more than 30,000 accounts pertaining to three networks associated with China, Turkey, and Russia state-linked manipulation activities.

A total of 32,242 accounts were added to the social platform’s archive of state-linked information operations, while the accounts themselves, along with all of the content associated with them, have been permanently removed from Twitter.

Attributed to the People’s Republic of China (PRC), the largest of the three networks included 23,750 accounts forming the core of the network, along with approximately 150,000 amplifier accounts, which were not added to the public archive.

The network was engaged in a range of manipulative and coordinated activities, mainly using Chinese languages to spread geopolitical narratives favorable to the Communist Party of China (CCP).

Furthermore, the accounts pushed “deceptive narratives about the political dynamics in Hong Kong,” in continuation of the activity of a 200,000 accounts network that was shut down in August 2019.

Twitter and other popular social media services are banned in China, but are accessible in Hong Kong, and the Chinese government is believed to have long been involved in disinformation campaigns targeting the Chinese abroad.

“Our proactive removal of this network from Twitter is a direct result of the technical efforts we instituted after thoroughly studying and investigating past coordinated information operations from the PRC,” the social media giant notes.

Despite its size, the new network did not achieve considerable traction on Twitter, as the accounts were identified and removed early. Most of the 150,000 amplifier accounts had few or no followers, but were meant to “artificially inflate impression metrics and engage with the core accounts.”

A total of 7,340 accounts targeting domestic audiences within Turkey were added to Twitter’s state-linked operations archive, including both fake and compromised accounts. Detected earlier this year, the network operated in support of the AK Parti and President Erdogan.

Twitter also took down 1,152 accounts associated with state-backed political propaganda within Russia. The accounts were cross-posting and amplifying content in an inauthentic, coordinated manner, promoting the United Russia party and targeting political dissidents.