What the Theranos whistleblowers learned about ethics in health startups 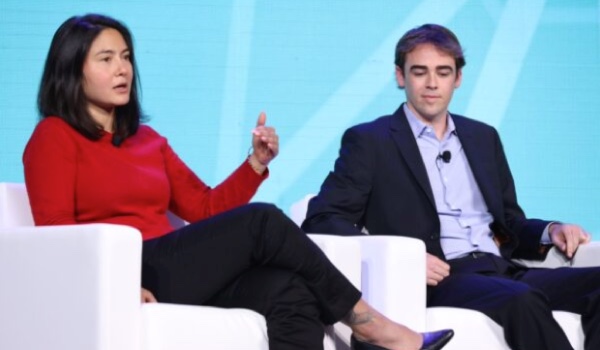 Erika Cheung and Tyler Shultz were the whistleblowers who helped to expose corruption at Theranos. They spoke at the Manova Summit in Minneapolis this week.

Theranos whistleblowers Erika Cheung and Tyler Shultz shared some of the lessons they learned from working in a culture of fear and secrecy at the Manova Global Summit on the Future of Health in Minneapolis.

“There were words we couldn’t say at Theranos, like ‘biology,’ ‘pipette,’ ‘research,’” Shultz recalled. “And we weren’t supposed to talk to other people at Theranos about what you were doing.”

Still, the two didn’t have any other career experience, so it took a while for the red flags to add up, Cheung said.

Now, with the former leadership of Theranos waiting for a 2020 trial, Cheung and Shultz have established an organization they call Ethics in Entrepreneurship, hoping to prevent other tech and health startups and employees from going through what they did.

“We’re all here because we want to make an impact and we want to do good and we have good intentions, but making sure you have that strong vision and figuring out how to maintain that” is challenging, Cheung said. “You have to figure out how to stick to those morals and standards and values despite the chaos.”

Though they’re far from having all the answers at this point, they pointed to some basics that can be applied to almost any company:

So-called vanity boards are popular in Silicon Valley, Cheung agreed, but especially in a highly regulated space like health care, “you need the right people asking the right questions.”

Despite spending most of his 20s wrapped up in the Theranos scandal, Shultz maintains a sense of optimism.

“So many things had to go wrong [in the Theranos case] that I think it’s unlikely something like this would happen again,” he said. “Though maybe I’m naive.”

Moderator Rebecca Jarvis of ABC asked the pair whether they thought former Theranos CEO Elizabeth Holmes should go to jail.

“There has to be some justice,” Cheung said, to great applause from the audience. “There has to.”TrendMD v2.4.3

Source: What the Theranos whistleblowers learned about ethics in health startups